Robert Plant has released part 7 of Zirka, the documentary from his appearance at the Festival in the Desert in Mali in 2003.

Dangerous Minds has posted a number of pictures of Led Zeppelin inside their private plane, The Starship (owned by singer Bobby Sherman and his manager Ward Sylvester). Some of the pictures seem to be new, however a number of them appear in Neal Preston's ebook, Sound and Fury. It is reasonable to assume Preston took all the pictures.

More interestingly, there is a short video taken inside the Starship.

h/t Suzanne at FBO
Posted by Brian at 9:04 AM No comments:

Robert Plant has released part 6 of Zirka, the documentary from his appearance at the Festival in the Desert in Mali in 2003.
Posted by Brian at 4:47 PM No comments:

Robert Plant Has Plans for 2014

It appears Robert Plant and the Sensational Space Shifters are going to be busy in 2014. 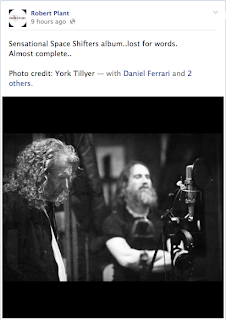 Today, Plant announced via Facebook that a new album is "almost complete." Meanwhile, a number of performances seem to have been leaked, although none are confirmed by the singer himself. Here's the dates rumoured/leaked so far, via ledZeppelinNews (note: Tickets for the Germany shows are already on sale.)

Last year at about this time, Plant said he had two albums almost done, one by the Sensational Space Shifters and one by the Band of Joy, recorded at Buddy Miller's home studio. There is no word on whether Plant and the Sensational Space Shifters' are finishing their original album, or have recorded a new one, but until there's an actual release date, I have to assume this album will no more see the light of day than those ones. 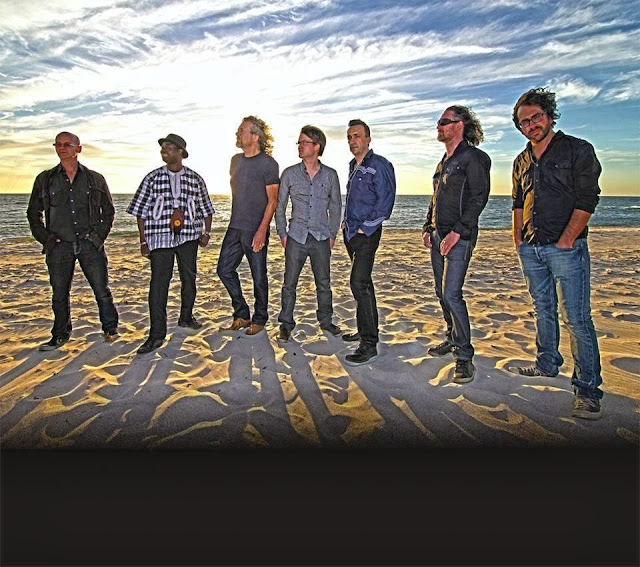 Besides being phenomenal singer, Jason Bonham's Led Zeppelin Experience vocalist James Dylan is also an artist. He has decided to share his skills with led Zeppelin fans with a series of pencil drawings. 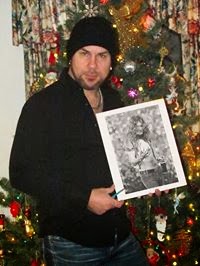 The first drawing in his "Led Zeppelin series" is done. It is a recreation of Neal Preston's shot of Robert Plant holding a dove at Kezar Stadium in San Francisco on June 2, 1973. Dylan's drawing is phenomenally lifelike and raises the question, is Dylan a better artist or singer?

Any one of these would make a stunning Christmas gift for any Led Zeppelin fan.

You can order at James' official web page.

This week I reminisce on my time in London in 2007, and talk about Led Zeppelin's O2 arena in London six-years ago this very night.

You can download the podcast at Podbean or Spreaker. If you go to Spreaker, be sure to follow the episode.
You can also stream Ramble on Radio on Soundcloud, or on YouTube and subscribe on iTunes. If you subscribe via iTunes, be sure to leave a review.
Posted by Brian at 4:53 PM No comments:

Is Led Zeppelin Coming to Spotify!

The New York Times is reporting that today Spotify, the online music streaming service, will announce a deal to stream Led zeppelin's caltalogue. This is a first, as led zeppelin has thus far not allowed any service to stream their songs. The band, however, has been negotiating with various streaming services since January.

Update This has been confirmed.


The rollout starts today and will continue through December 15th, starting with Led Zeppelin and Led Zeppelin II. Tomorrow, Led Zeppelin III and Untitled fourth album arrive. Friday brings Houses of the Holy and Physical Graffiti and Saturday will feature Presence and In Through the Out Door. Sunday, December 15th will be devoted to six albums: The Song Remains the Same, Coda, BBC Sessions, How the West Was Won, Mothership and Celebration Day...

Sadly, while Spotify is available in such thriving giants such as Andorra, Estonia and Liechtenstein, here in the backwater of Canada, Spotify is still unavailable.
Posted by Brian at 10:50 AM No comments:

Robert Plant has released part 5 of Zirka, the documentary from his appearance at the Festival in the Desert in Mali in 2003.
Posted by Brian at 6:41 PM No comments:

In Other "No Shit Sherlock" News...

...Kashmir has been nominated for Best Rock Performance.

While Led Zeppelin has never won a Grammy, Jimmy Page and Robert Plant won a joint 1998 Grammy in for the song Most High, from the Walking Into Clarksdale CD. Individually, Plant won five Grammy's in 2009, including album and record of the year, for his collaboration with Alison Krauss, Raising Sand, and John Paul Jones' band Them Crooked Vultures won one Best Hard Rock Performance in 2011 for the song New Fang.

Update - Dec 11 From the comments: "the band was finally honored in 2005 with a Lifetime Achievement Grammy..."
Posted by Brian at 1:05 PM 3 comments:

Robert Plant took the stage last night at the Royal Festival Hall in London to pay tribute to Bert Jansch. Jansch was a Scottish folk musician who died in 2011. He was a massive influenced on guitar players, including Jimmy Page, and was honoured last night at a concert that included Plant, Donovan and a video performance from Neil Young and Jack White. Bernard Butler sat in with Terry Cox, Jacqui McShee and Danny Thompson, the surviving founding members of Jansch group Pentangle.

Butler also got on stage with Plant, Accompanying Plant on guitar when Plant sang Go Your Way My Love. Plant and Butler where also joined by Canadian folk singer Bonnie Dobson on her song Morning Dew. Dobson sang most of the song, while Plant played bongos and sang primarily harmony. Plant came back onstage for the shows finale, Strolling Down the Highway.

There was anticipation that Jimmy Page might make a surprise appearance. Page has noted Jansch as one of his earliest influences, and his solo guitar piece from Led Zeppelin's first, self titled album, Black Mountain Side is an almost note for note recreation of the Jansch piece, BlackWater Side. Page was a no-show however, who appeared not to have been in attendance at the show at all.

Here's a couple of video's of Robert Plant.

This week I look at John Paul Jones week touring with the Dave Rawlings Machine, then I offer some Christmas gift suggestions for the Led Zeppelin fan in your house.


Links from the show:

Robert Plant has released part 4 of Zirka, the documentary from his appearance at the Festival in the Desert in Mali in 2003.
Posted by Brian at 10:35 AM No comments: