True Blood In the Evening

Last year, Led Zeppelin licensed the use of their songs Kashmir and Since I've Been Loving You for the TV show Revolution, and everybody got excited: It is a well-known fact that obtaining the rights to use Zeppelin songs is pretty difficult At the time, I mentioned on my Podcast that they had licensed the producers of Californication to use Dazed and Confused in the opening scene of season fives finale.

This week, In the Evening was used as the ending song of the Vampire drama True Blood, as well as the episode title. In it, Jimmy Page's bowed guitar and John Bonham's tympani intro carry the final dramatic seconds of the episode, with credits beginning to roll after Robert Plant's wailing, "In the evening..." intro. Radio.com explains how the episode came to being used (warning, there is some spoilers at the following article.)

One of our assistant editors did what every music supervisor dreads... He ‘temped’ the last scene with the song, (meaning he put it in as a placeholder until they could figure out another song to use.) This should never happen, as it leads to a phenomenon known as ‘temp love.. That is when the producers see the scene with a song temped in and it works really well, and now they can no longer see any other song working in that scene. When you have a rich and costly song like ‘In The Evening,’ that can be a big problem. We tried many other songs that worked to varying degrees, but nothing worked as well as ‘In The Evening.’ So after discussions, negotiations and hoop jumping, we hammered out a deal. And we are thrilled to have the song in the show.


Another interesting feature in the show happens the scene previous, however, when they are showing the previous life of two main characters in the 17th century. While in a plague hospital, a character than can only be described as a Them Crooked Vulture walks behind the 2 characters. Here's a screen shot of what could have walked off the website of John Paul Jones' band. 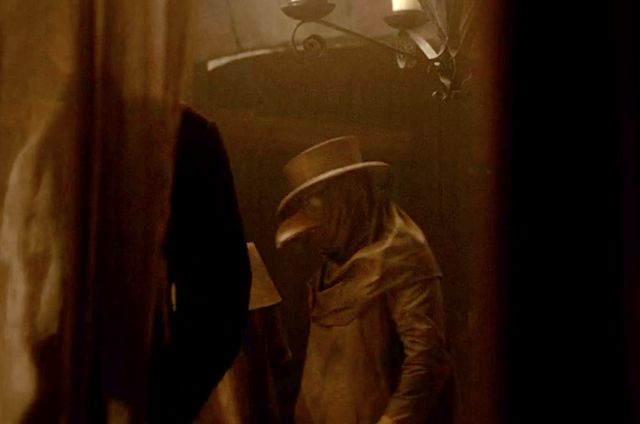 As well, the trailer for the movie American Hustler was released today, with Led Zeppelin's Good Times, Bad Times as the feature song.

Set in the late 70's, American Hustle tells the story of the FBI's ABSCAM sting operation, which saw one United States Senator and six members of the House convicted of bribery and conspiracy. Led Zeppelin recently also allowed When the Levee Breaks to be used in Ben Afflick's thriller Argo. As well, When the Levee Breaks turned up in the trailer for the Disney flop John Carter.