Book Review: Lisa Robinson -There Goes Gravity: A Life in Rock and Roll

The first lines Mick Jagger said to Lisa Robinson, quoting her work to her side-stage at an Eric Clapton concert, mark Robinson's style of criticism. In her own words: "I never felt like a "combatant," or reporter; I felt like an ally." Robinson is a music critic because she, like the acts she covers, loves the music. She's a fan, not a cynic and her "defense attorney" approach to writing about bands ingratiated her with a closed group like Led Zeppelin.

Robinson travelled with Zeppelin on their 1973, '75 and '77 tours, as well as attended Knebworth in '79. She reported for Hit Parader, where I used to read her tour accounts as a teenager, and, more importantly for the band, in England for New Music Express. Robinson was one of the select few journalists allowed inside the Zeppelin bubble.

In her book, There Goes Gravity: A Life in Rock and Roll

, (available now from the usual book sellers) Robinson recounts her career. In Chapter 2 she gives us look at her time With Led Zeppelin, from her second time seeing them in Jacksonville, Florida in 1973 she was a fan (she recounts a disappointing first time seeing Zeppelin at Madison Square Garden in 1970):


... it was exciting, complex and majestic... I heard strains of blues and American roots music and a combination of everything from the 1960s Eastern-influenced British band Kaleidoscope to the acoustic, hippie-ish Incredible String Band, to Willie Dixon... They were bigger and more complex than Pink Floyd or Cream.

She recounts all her tours, and recounts the key people she dealt with, including Jimmy Page, Robert Plant and John Bonham, the latter of whom she says, "Drunk, he was a madman... sober, to me, he was a sweetheart - articulate and a gentleman." She did interviews, snippets of which she provides and recounts stories of the road. She was in the room during Bonham's somewhat famous rant about Karen Carpenter winning the Playboy magazine best drummer award, and was in the plane, at 25,000 feet, when Richard Cole pulled a gun to settle a dispute between Jimmy and a reporter from the London Daily Express, a reporter Robert wanted to make nice with because his father read that paper.

If you are planning to read There Goes Gravity: A Life in Rock and Roll

for the Led Zeppelin content, however, you will be disappointed. Other than Led Zeppelin, Robinson travelled with or spent significant time with The Rolling Stones, John and Yoko, David Bowie, The New York Dolls, The Ramones, Patti Smith, The Clash, the Sex Pistols, U2, Eminem, Kanye West and Lady Gaga (did I miss any?). The book covers all these artist and more. It is a sharp, interesting and often fun read, but it is not a Led Zeppelin book.

Thanks to Tight But Loose's Dave Lewis (www.tightbutloose.co.uk) for coming on today's program. I talk to Dave about the re-issues, Robert and Jimmy's comments on the BBC yesterday, Dave's books and his magazine, Tight But Loose.

You can also subscribe on iTunes. If you subscribe via iTunes, be sure to leave a review.
Posted by Brian at 8:43 PM No comments:

Dave Lewis is reporting that the latest edition of his magazine, Tight But Loose number 37, is almost ready to roll out and he is making it available for a almost half of the usual cover price. This edition can be had fo £3.00 plus postage (here in the America's, that still comes to $12.50). 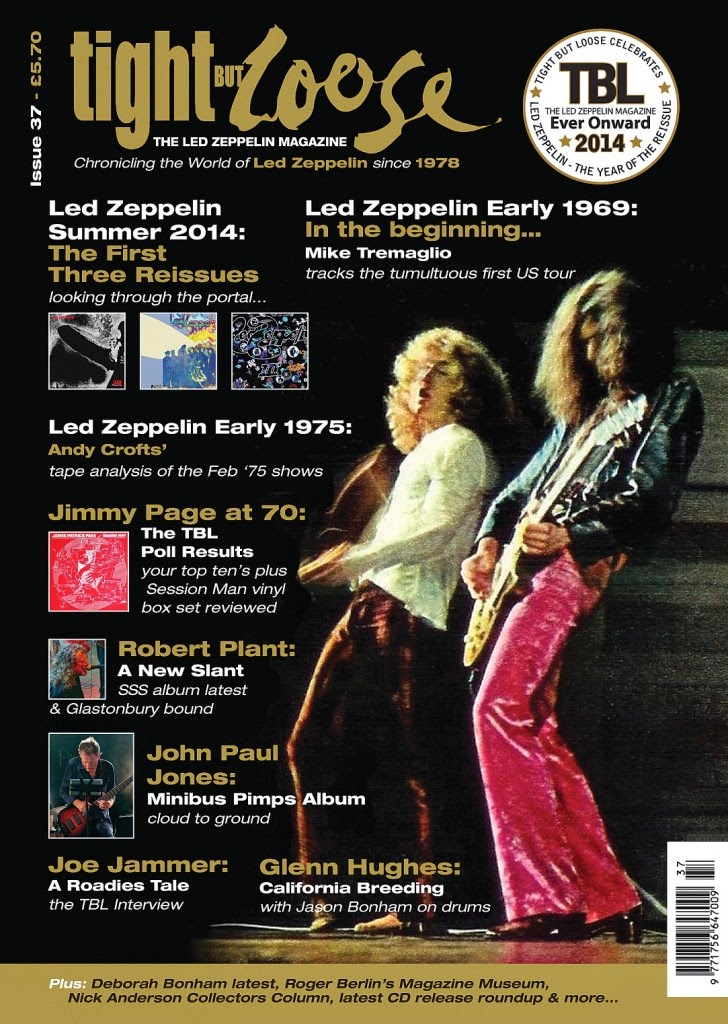 Led Zeppelin Summer 2014 – The First Three Reissues: Your guide to the first three Led Zeppelin reissues with key insight and background info to what is in store…

Led Zeppelin Early 1969: Mike Tremaglio tracks gig by gig, the tumultuous first Led Zeppelin tour of the US with extensive and accurate detail guaranteed to take you back to the psychedelic ballrooms and venues where the legend first came alive…

Led Zeppelin Early 1975: Andy Crofts continues his tape analysis of the early months of 1975 –stopping off in February where Led Zeppelin were in the throes of a significant physical recovery…

Jimmy Page at 70: On the occasion of his 70th birthday – the TBL Poll Results –the all-time favorite Jimmy Page performances as voted by you – plus James Patrick Page Session Man box set reviewed.

Joe Jammer: The TBL Interview: A roadies tale and more – exclusive interview with the Zep ’69 guitar tech and roadie and performer in his own right…

Glenn Hughes on California Breeding: "Jason Bonham can now really put his hat next to his father’s – this is the greatest drumming he’s ever done on record by far."

Nick Anderson Collector Column News of Led Zep 1 and Houses of The Holy acetates, The Object

The pricing is as follows, and can be ordered through the Tight But Loose website:

While Midnight Oil is the second single the band has done ahead of the release of their first album on May 20th, it is the first European single. Both singles can be bought now at iTunes,
or downloaded when you preorder.

is also available for pre-order now at Amazon.